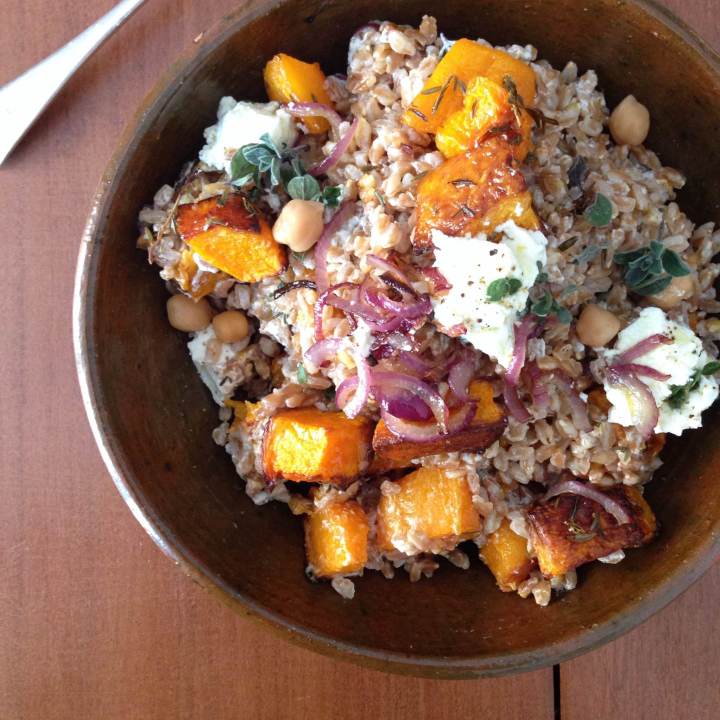 About a year ago I wrote about the beautiful dark skinned pumpkins from Mantova in the north of Italy, the spiritual home of Italian recipes involving the zucca.  In Rome, one of the best places to go on the hunt for a fine pumpkin is the Campagna Amica farmer’s market in Via San Teodoro.  Last Saturday I selected a beautiful big butternut, and over a few days the pumpkin made its way into the oven with carrots and potatoes, was roasted with garlic and thyme for risotto di zucca, until the last hunk was chopped into nice pieces, tossed once again in salt, olive oil and dried thyme from the Lubriano garden, to be roasted, again, because the heady, nutty sweetness of a good Zucca comes out to sing after 30-40 mins in the oven. 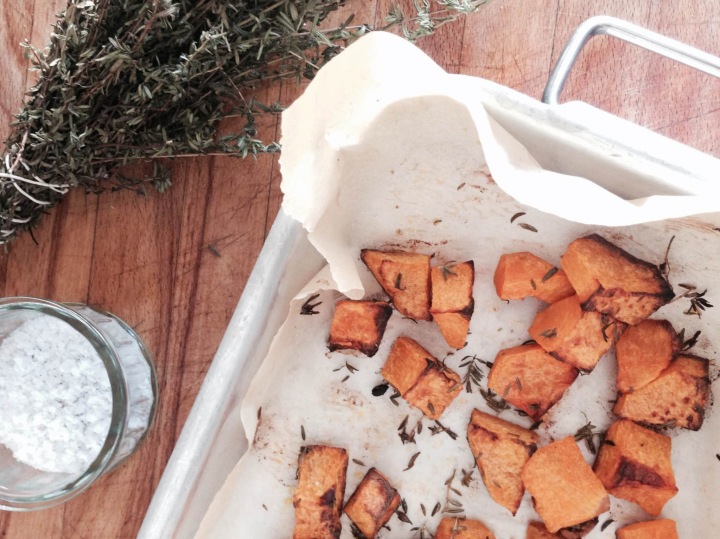 Farro; that ancient grain full of vitamin B, iron, protein and fibre, seemed like the perfect accompaniment to the by-now soft caramelized chunks of pumpkin, as did some quickly marinated daubs of Italian goat’s cheese, Caprino.  Bought in small rolls, Caprino is the very fresh and super soft Italian goat’s cheese, much milder than French chèvre and that when that sprinkled with pepper and oregano, and doused in good extra virgin olive oil, reminds me of the heavenly marinated goat’s cheese they make at Meredith Dairy in Western Victoria. 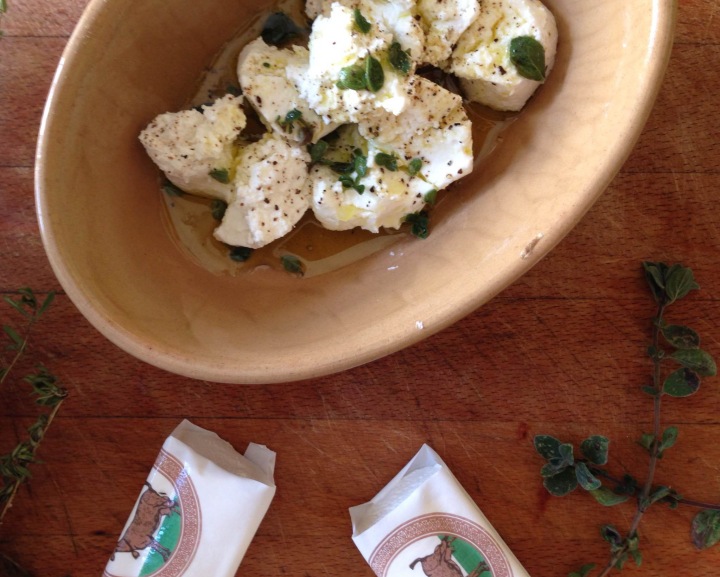 To finish I quickly fried some finely sliced red onion and threw in the remains of the (smoked) chickpeas I had attempted to set fire to the house with last night.  A very autumnal lunch. Farro and Pumpkin lunch – Serves 2 1 cup farro – pearled or semi pearled 1/3 large butternut pumkin 1/2 small red onion – sliced Half a cup of cooked chickpeas Salt and pepper to taste Extra virgin olive oil Fresh thyme and/or oregano Roast the chunks of pumpkin in a 190 C  oven for 20 – 30 mins or until soft and caramelized. Pour a cup of pearled farro into a saucepan of cold water, bring to the boil and then lower the flame slightly and cook for 20 minutes until al dente.  Note that farro cooking times differ wildly but pearled or semi pearled farro generally takes between 15 and 20 minutes.  Break some mild soft goats cheese or feta into a bowl with fresh herbs, pepper and olive oil.  Toss the red onion quickly in a well oiled frypan. Once the farro and pumpkin have cooked toss everything together in a large bowl leaving some cheese aside to garnish.  Add olive oil, salt, pepper and fresh herbs to serve.